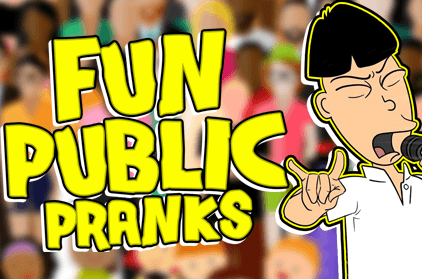 Harmless Yet Fun Public Pranks You Can Pull Off

Before you try any of these prank ideas, this is a disclaimer to keep it a harmless prank (as the title suggests!); we don't want to cause trouble and inconvenience to other people!

To pull off a public prank, you need courage, quick thinking, and, most importantly, a great sense of humor. To get as many people interested as possible, some of the ideal locations for pranks to do so naturally include places like subway stations or food courts in shopping malls. In certain locations, you can stage flash mobs and other unconventional events in a way that would otherwise be out of place. Despite being popular targets for pranks, people have a hard time predicting when and where they will occur.

Read more from this blog to get more ideas!

This is for starters in the "prank the public" game! Find your victim, and make sure that your accomplice is somewhere distant to film the prank. You will just have to hold a stranger's hand out of nowhere in this prank. Your victims' reactions are the best, so make sure that your friend records everything, as their reactions will make you laugh hard!

This is a courageous prank as it takes guts to smell people you don't know and who don't know you! Your first step would be to make sure that your friend is prepared and all set to record the prank. Next, choose your target! Just a reminder that you won't get a positive reaction from everyone, as again, who doesn't freak out when someone else smells them?! Just smell whoever! Be brave!

Pretend To Be Famous

Brett Cohen is the mastermind of this harmless prank idea, he is a famous Youtuber who does pranks and other sorts of things. This "Fake Celebrity Pranks New York City" video of his has gained over 6 million hits on youtube; it surely is a bad idea!

Brett Cohen had a crazy plan to deceive thousands of people strolling through Times Square, and it succeeded! It worked and generated quite a fuss. He was escorted by two professional bodyguards, two helpers, and photographers posing as paparazzi. It was worth the wait for the assistants and photographers as they spread the word that a "huge star" was going to exit the 49th street marquee at NBC Studios. The team was asked who Brett was, but no one knew. Either make something up or take a picture with him so their social media followers can help them out.

If you're going to do this prank, it would be helpful to search for the best locations for pranks, a place where there are a lot of people. And you'd also need a lot of friends to join you with this prank. Good luck!

This, we say, is one of the classic pranks out there! So, you're going to set up everything you need first: a Bluetooth speaker, a phone connected to the speaker, and a camera to record your victim's reaction. You would also need an accomplice to record the prank! Find your target, and then hand them the speaker politely. Ask if they can hold the speaker for a moment because you're going to do something important and then leave. Once they are waiting for you to come back, play loud, funny music! Don't expect to get a positive reaction from everyone, as this is really embarrassing! Nonetheless, it would be fun if they would just dance to the music.

This prank idea is from the famous Tik Tok, @yescyrille. Some people vibed to the music in his videos, but some immediately left. You can also see people passing around the victim, glaring with judgment or smiling at them. He also does different stunts besides this Hold My Speaker prank!

You're A Cheater Prank

This is definitely one of the most dangerous pranks and crazy pranks to do; brace yourself! Your first step to succeed in this prank is to have courage. Again, you have to have courage! Your victims are couples, couples that are having fun, talking, or even just walking around a public place. Next, prepare yourself for the most dangerous act. If you're a girl, confront the guy. Shout at him and tell him he's a cheater. You can also slap him if you're really that brave, but it is not advisable as we don't want to harm other people. Make a scene, make it look realistic. Make sure to apologize after the prank!

YouTube prank master Jack Vale gets some help from his real-life wife in order to make him look like a lousy husband in this genius prank. As part of the joke, Vale's wife dons a plush stomach tuck, and the two attempt to lift an extremely heavy rolled-up carpet. Whenever a stranger offers to lend a helping hand, Vale instructs his heavily pregnant wife to lift one end. As you can see, good samaritans of both sexes often oppose allowing the pregnant woman to perform any physically demanding tasks.

Over his wife's objections, Vale asserts that she is capable of handling the large rug on her own. In one instance, a woman begs another passerby for help because Vale is being so obnoxious.

Other Pranks To Try

Not everyone has the guts to do all these famous pranks out in public, and it isn't always necessary to be out in public to pull off an epic prank, so here's a suggestion for you: a prank call. A prank call; your phone is enough. You will need a script to make the flow of the conversation more convincing and realistic. For example, call your friend and tell them that they did something terrible, or call them, make it seem that you accidentally dialed their number while talking to someone else about them. If you think you'd stutter while speaking with your friend, you can try downloading a prank call app. This app from Ownage Pranks has everything that you need for a successful prank call, from prank call scripts to making the call anonymous.