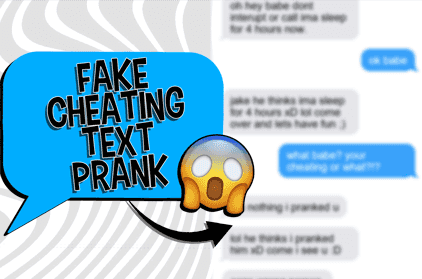 Moreover, many people live in constant anxiety that their significant other may be unfaithful to them at some point. It doesn't matter how much we rely on our companions, the fear that they'll leave us for someone better is something we'll live with forever. This is why doing a fake affair prank on your partner could be one of the most dangerous things in the world, and we are not even exaggerating! Whether you are doing this as an April Fools prank or on any ordinary day, it is indeed a devious prank plan.

Just a reminder, be careful when doing this prank to your loved one. You might get an unexpected reaction or hurt them so much. Nonetheless, here are some ways to try!

This video from SSSniperWorld gained over 4 million hits. SSSniperWolf sends text messages to random numbers on Craigslist saying that their significant other cheated on them with her. In her first prank victim (timestamp 0:50), she messaged the girl, "I'm sorry I didn't know he had a girlfriend he didn't tell me!!!" The victim immediately replied. The first victim seems to be doubtful about her BF! Everyone seems to fall into her trap; this girl is brave!

Cheating Through Text Prank on Boyfriend!!! (Gone Wrong) By Its KiannaJay

The cheeky text message script "He's not here anymore so come over" has been all over Tiktok and Youtube, and if you're going to do this make sure your significant other just left your house to see their angry reaction. Its KiannaJay did the same script for her boyfriend. The boyfriend immediately replied with anger. The Youtuber went on and on with her prank, saying that her other boyfriend is coming over and bringing her lunch! Watch the video to see how it went and who went arrived!

Pranks are definitely one of the best things on the internet, especially if the reactions are genuine. This user Tiktok Love compiled different Tiktok videos with the same concept, a cheating text prank. With almost the same script as mentioned above, "hey, leaving now, be there soon *kiss emoji*" As you watch the compilation, these girls don't have the most adorable reaction because they all seem scary! Though, who wouldn't get mad for this?!

A man's reaction to his fiancée's infidelity prank has gone viral on social media, and he's been getting lots of praise for it. There is speculation that Monica is cheating on Sam with another man. Monica decided to execute the classic prank on her fiancee. It is a risky hoax in which one spouse sends the other a message, making it look like they are having an affair. On the other end, the recipient's reaction is captured on video. The TikTok video went viral first, then appeared on Reddit. Netizens viewed Sam's reaction as "innocent" and "adorable," but others said that Sam had twisted the game to obtain Monica a surprise birthday party.

Do The Prank Yourself

Are you ready to take on the challenge? Follow these steps below:

A successful prank needs good preparation. If you can't prepare yourself enough, expect that this prank will go down the drain, we don't want that! Prepare your script and how you want the conversation to flow. If you do the same script as mentioned above, expect that your significant other already knows it as it's been done a lot. However, if you don't have anything more in mind, that would do!

Step 2: Do the horrifying prank

Brace yourself as you do the cruelest prank! Text your partner your script, and watch what happens next. You might get an angry, sad, or confused reaction. Nonetheless, it would be a success if you unleash the actor in you.

This step is the step you don't want to forget. After you pull off the prank on your significant other, they would get hurt and mad. Apologize. Say how sorry you are, and it's just a prank, and that you won't do such a thing to them. Hugs!

Apps You Can Use

You can also use different apps to pull off a perfectly fake affair prank on your partner.

Pranksters take advantage of this tool to create fictitious conversations with their victims. Both Android and iPhone users can use the software because it has two different user interfaces. You can use emoji-laden chats to play pranks and have a little fun in the struggle of daily living. You may easily create a phony conversation on any social media network by selecting a theme. Additionally, you can use this feature to make it appear to be talking to someone. Because the fictitious exchanges appear so authentic, no one would suspect anything was amiss if they weren't shown the transcripts. It's the best app for pranks and having a good time.

Using the app, you can also create phony call records and audio recordings. This app's most unique feature is the ability to create false status updates. For the best pranks, one can quickly update and create a false status. Chats can be made more lifelike by sending phony audio messages and other materials.

It's a fun tool to play pranks with, and it's easy to use thanks to its simply designed interface. In the app's edit area, users can alter their username, last seen time, status, and even the number of likes. This app makes it simple for users to play practical jokes on their loved ones.

How about sending prank calls to your partner anonymously? You can do that with the Ownage Pranks prank call app! With this app, you can simply modify your caller ID and use a false number to automatically prank your partner and say that you are someone their partner hooked up with or whatever cheating scenario you can think of! The app is available on both iOS and Android devices!

Just a gentle reminder, make sure to apologize to your partner after doing the prank!