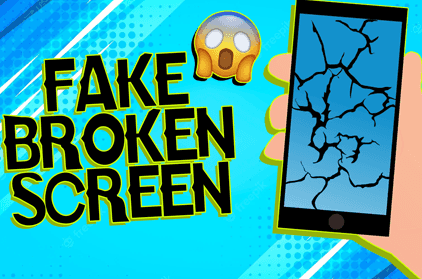 To make a friend think their cell phone or laptop screen is broken is a common practical joke.

One app is all you need to fool all your friends with the shattered screen joke, as it is a practical and adaptable trick. There are many funny applications in the tool category that do nothing but make you laugh. For example, a fake cracked screen will definitely make your device stand out. The program works as a conventional theme or launcher, imposing the impression of broken glass on your smartphone's screen.

If you want to have some fun and perform the fake broken screen prank, we suggest you pay close attention.

This is one of the top Android fake broken screen prank apps from Kingtools. This tool can be used to make a joke or fool your pals. It replicates a damaged and shattered screen. No one will suspect it's a prank with convincing graphics. Can you envision this app on a new smartphone? Try it and see.

The software includes a broken glass sound and an actual broken image. It also provides several crack screenshots for use as wallpaper. To make it more realistic, the fractured image always appears first.

Fake Broken Screen is available for free download for Android smartphones. The minimal file size means it won't take up much space on your device. Are you tired of the same old prank? Do you want to elevate your joke? For whatever reason, Fake Broken Screen is an excellent tool to install.

This is an Android and iOS prank and gaming app. One of the most popular apps to imitate a broken screen with over 500 thousand downloads on Google Play. It includes thrilling games as well as phony damaged screen hoaxes. You can also break fluorescent lighting and windows.

After the prank, you can relax with a rewarding app like Crack & Break It! No serious damage is caused by this software. Import a photo of your partner or employer and use the Image Breaker tool. Certainly, don't tell your boyfriend or boss.

This software is both enjoyable and soothing. It has realistic sound effects and excellent graphics. Not to mention multi-touch support for numerous breaks. The best part is that it is free to download. If you require more functionality, go for the Pro version.

This software gives a fun way to trick your pals into thinking they broke your phone. To test your reflexes and coordination, touch the Start button as soon as the app opens.

You will be redirected to a blank screen when clicking the Start Test button. Yellow orbs will emerge randomly on the screen. By the end of the test, the screen will progressively activate the simulator, leading your friend to believe they broke the screen by tapping too hard.

You can also skip the game and receive the broken screen pattern as your wallpaper by selecting the next option.

This is a fun and handy live wallpaper software. When you open the app, broken skin with a PCB within moves when you tilt and spin the phone.

A few graphical bars can be seen on the electrical board. These bars show your phone's battery, CPU, and RAM consumption in real-time. Other options can be found in the settings, which are located at the bottom left of your screen. The first two selections provide app information. When you get to the third choice, you may choose which sensor you wish to utilize to move the shattered glass. It also allows you to adjust the movement sensitivity.

It enables you to adjust the images of the broken screen, making it appear more realistic. But choose wisely, as performance depends on your phone's specs.

A transparent screen, two backgrounds, and any backdrop from your Gallery are included. If you don't like the crack, just set it to low, and it will disappear.

The best feature of this app is that it has no ads! Now, who wouldn't want that?!

It provides a damaged screen wallpaper. You get a magnificent scene, and then the screen cracks with a glass sound. We can't alter the wallpaper, but other than that, the app works flawlessly and without slowness.

The nicest aspect of this software is its own Night Filter, which is a terrific addition. It shields your eyes from blue light from your phone. You can manually switch it on or off or set an auto timer. The Night filter is available on the notification panel.

This program also allows you to control the brightness. It is set to 0 by default but can be increased to your liking. The other choice is Screen Dim, which reduces the brightness.

While downloading apps is a great idea, some of us may not have sufficient storage to download a fake broken screen app and configure it. With this, Youtube is your friend. A selection of broken screen videos is readily available for your convenience!

Parents are tricked into thinking their TV screen is broken in a viral TikTok prank. Children are videotaping their reactions to an image of a broken screen. Playing a YouTube video that shows a shattered screen and capturing their emotions has been a great way for children to mislead their parents.

Want to Try Something Else?

If you think you can handle taking it up a notch, try some good old prank calls.

We've all been bored to the point of wanting to wreak havoc on the lives of our friends and family members, even if it means making a prank call. Only the most difficult aspect of the call is preparing what you're going to say.

Download a prank call app and treat the trickster in you! The app's finest prank calls are hand-picked and showcased daily for hours of entertainment. This app from Ownage Pranks has an extensive collection of downloadable prank calls that provides a prank for every situation. With the finest prank call tool, you can simply change your caller ID and automatically prank ring your friends using a bogus number.