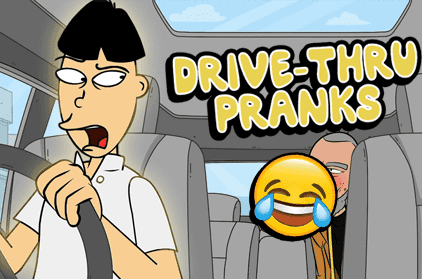 Are you going for a long late-night ride and then suddenly feel hungry? Sure, the first thing that pops up in your mind is to get a drive-thru order! Isn't it more enjoyable to eat a Taco Bell or Mcdonald's meal during a ride while singing along with the radio?!

Given the long history of drive-thru restaurants, it's safe to assume that people have been playing practical jokes on unsuspecting drive-thru employees for at least as long. Who wouldn't dare try drive-thru pranks?! Wouldn't it be fun to spice up the drive-thru lane for a while?

However, if you're going to try drive-thru pranks, make sure to keep it clean and harmless; we don't want to cause inconvenience to fast-food workers!

Fasten up your seatbelts, and get ready for this list of harmless yet funniest drive-thru pranks!

Here are some hilarious drive-thru prank videos we got online, which you can get your idea! Oops, before you get started, make sure to get your cameras ready to film your victims' reactions!

When you are a drive-thru worker, you are alert every time a car comes in. But what if there's no driver?! What would you do? Especially if it's late at night, how creepy could it be?! This prank from the famous YouTuber MagicofRahat made a drive-thru employee scream and ask for help! The twist with Rahat's invisible man gag comes when the manager and employee return to find Rahat sitting casually in the driver's seat.

Salute to the worker at 1:33 for not batting an eyelash! She even told Rahat, "Don't hurt nobody!"

This prank by Ed Bassmaster will surely freak out every staff member at the drive-thru restaurant window. He, the driver, disguised himself as a zombie and attempted to scare a few employees. Even if the zombie apocalypse isn't genuine, it's safe to assume this prank isn't going away anytime soon. Almost every drive-thru employee freaked out as Ed turned to the window.

Grab Ice Cream Cone but with a Twist Prank

Coning, any of you out there? In order to pull this prank, you'll need to place an order for ice cream and then grab it from the top (where the ice cream is). While this doesn't help the driver, who has to cope with ice cream on his hands, it's amusing to observe how the unsuspecting employees react.

You don't get your fast food order stolen in the drive-thru too often. That's exactly what the snatch the order is. In this video from MrYazzur, as soon as the car drives up to the drive-thru window, the runner sprints between the vehicle and the window to intercept the order from the driver. You might not see it coming, so be extra careful. It would also be best to avoid ordering beverages as they may spill.

As you can see in the comments, this is an excellent way to get free food!

Youtuber Rahat went beyond his limits for this drive-thru prank. Some employees freaked out, and some talked to the robot! We're not living in a time where you can have a robot go to the drive-thru and receive your fast food order, but at least people are intelligent enough to dress as robots and go to the drive-thru. We're not sure which is more impressive: the robot or the concept.

Some even took a video of the robot, and some screamed at the top of their lungs!

This prank could be the worst idea because you'd make every employee run in panic; we don't want to harm fast-food employees just for the sake of a prank. Nonetheless, this video from MagicOfRahat is pretty insane. In this prank, he utilizes a static shocker to trick drive-thru personnel into thinking they've passed an enormous quantity of energy to him, causing him to pass out. The reactions are quite amusing and heartwarming since most of them are worried and concerned.

Other Pranks You Can Try

Let's say you are shy to prank those who are busy working in the food industry; you can always try these pranks at home; you can pull them on your friends or family!

The night before the prank, put some cereal and milk in a bowl. After that, put the bowl in the freezer for a few hours. Prepare a frozen cereal and a spoon for your "victim" the following morning and offer to cook breakfast. This hilarious prank is sure to make you laugh out loud. Make sure to film your victim's reaction, as it would really be fun to look back at!

Attach a thin piece of string to plenty of miniature fake spiders. After you've taped the string to the door, close the door. Cram the spiders into the tiny gap between the top of the door and the frame. Upon your victim opening the door, you will see the spiders fall from the ceiling and look to be swarming towards them. Record their reaction with the video camera.

This prank idea never gets old; even after you've done this millions of times, it will surely come back with a newer and enhanced version. Prep yourself and your script before calling your victim. If you can't prepare a script for the prank, you can always download a prank call app from Ownage Pranks which gives you access to a bunch of prank calling scripts you can use. Make sure that you don't stutter so it won't be obvious.

Ownage Pranks can also make the call anonymous so you can trick your victim and make them confused. You can also access various prank ideas with the app. Moreover, this app is available on both iOS and Android devices. Prank anyone, prank anytime!