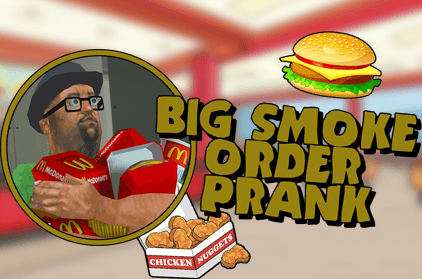 What is up, Grand Theft Auto fans? In this very special installment of Ownage Pranks’ Pranking 101, we’re giving you something you’ve always wanted: big smoke’s order prank! Many users from the internet have been doing this prank idea for a while now and have garnered interest from pranksters like us. This big smoke order is definitely going to fill your tummy and will bring fun to your friends. Alright, buckle up your seatbelts because we’re going on a drive-thru trip to Clunkin’ Bell!

Who is Big Smoke?

Grand Theft Auto (GTA): San Andreas is one of those games where you can steal cars, planes, and other vehicles. The objective of this game has been changed from a top-down view to a first-person perspective, which creates an interesting twist for gamers because they can't see what's ahead and have more control over their character movements when driving or walking around in certain neighborhoods.

Melvin Harris, also known as Big Smoke, is a character from the GTA series. He first appeared in the original GTA game and has since become an icon for gamers around the world with his brash demeanor that drips with style. The name ‘Big Smoke’ refers to London, England and it has been used since the game was first released back in 1997 when they were still using old-fashioned graphic designs for their games which made them seem more realistic than other video games of its time.

What is Big Smoke’s order?

Big Smoke’s order is a scene from the video game where Big Smoke orders a huge amount of food, together with Carl Johnson, at a drive-thru fast food place called Cluckin’ Bell. When YouTube user /james227uk uploaded this clip on February 16, 2020, it has garnered instant popularity as pranksters have found this as a great opportunity to use as a recorded prank call soundboard. As of 2021, it already has a whopping 9.2 million views—making it a great prank idea.

If you’re wondering what Big Smoke ordered in Cluckin’ Bell, the fictional food place in Grand Theft Auto, here they are: two number 9s, a number 9 large, a number 6 with extra dip, a number 7, two number 45s, one with cheese, and a large soda.

YouTuber ComradeWarbear made a video figuring out what Big Smoke actually ordered. According to the official Cluckin’ Bell Website: The Number 9s are a Fillet Burger, the number 6 is the chicken wings, the number 45 is a Fowlburger (one with cheese), the number 7 is a bucket of chicken, and the large soda is seemingly Sprunk (the in-game version of Sprite).

Clunkin’ Bell employee: Can I take your order, please?

Big Smoke: Carl, what do you want? You gotta eat to keep your strength up, man!

Sweet: I’ll have a number 6 with extra dip.

Now that we’ve gotten to know the man behind the famous Big Smoke order meme, here’s a list of how you can become your very own Big Smoke for your next pranking session with your friends and family!

Use a spoof call app for your Big Order order prank

Save yourself the trouble of buying a new SIM card or buying a burner phone for your prank calls with Ownage Pranks’s own spoof calling app. Since you’ll be needing to hide your identity for these Big Smoke order prank call ideas, you can prepare yourself by downloading it right now, whether you’re on iOS or Android.

A spoof app is a quick and easy way to change your number, but without having to buy or borrow another phone. It masks and changes your number, and creates a convincing front for the person on the other end. It is great for strangers and services that notoriously spam your inbox. There is a lot of magic that goes on behind the scenes, but basically - we take your actual info, scramble it and hide it behind a fake number. Think about it as a mask and your phone number is the master of disguise.

If you want to make your Big Smoke order prank idea go off as planned, why don’t you start by downloading our spoof calling app right at this moment!

Piss Off Your Parents with a Big Smoke Order Prank

Nothing beats being able to annoy your parents with a harmless prank call! For this prank idea, you need two things: a spoof call app from Ownage Pranks and the Big Smoke order prank call soundboard. All you have to do is when your parents are out, call them using your app and play the Big Smoke order prank soundboard and watch them get annoyed at you for not understanding what you’re trying to say!

If you want to level up your prank call game with your friends, you can try prank-calling restaurants using the Big Smoke order prank script we have. The key to this prank call is to keep insisting that the restaurant offers a number 9, number 7, number 6, and a number 45 according to their menu. You can also tell them that your friend, Big Smoke, was the one who asked you to order these things!

And that was it for Ownage Pranks’ Pranking 101: Big Smoke Order Prank. Always remember to keep your pranks fun and harmless!

As always, happy pranking. Keep us and Big Smoke proud!