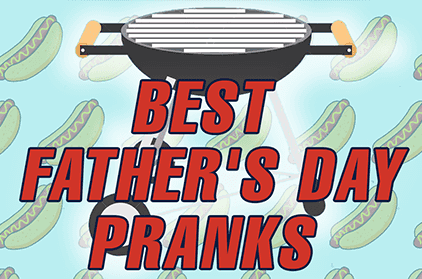 Dads may be our superheroes, but let’s face it, their sense of humor isn’t exactly their best super skill! They always seem to tell the same bad jokes, over and over again, until we're all ready to scream. But even though we roll our eyes every time they start telling a bad dad joke, we secretly love them for it.

During Father's Day, a thoughtful gift can do the trick, though why not one-up his dad jokes with a hilarious prank for a change? If you’re looking for clever ideas, here’s our roundup of crazy dad pranks made for dads who love a good laugh!

Are You Feeling the Bern Yet?

Some parents love their children too much; they’re willing to give them credit cards listed under their names, but what happens if, instead of emergency purposes, a kid uses the hard-earned money to donate to a political cause? Nope, we’re not talking about a meager dollar here, but a whopping $6000. “I ain’t feeling god damn Bern!” was the funny response of a dismayed Dad after our very own Ownage Prank caller Russell called him up, thanking him for being one of the largest donors for the Bernie Sanders campaign. Amidst being worked up, the dad had no qualms about his son supporting a known political figure (it’s his own business, after all!) but not to the cost of using his credit in an impractical way, of course!

Even in their old age, dads still see themselves as the protectors of the house, so an Empty House Prank is nothing short of a savage troll! A prime example is when a guy decided to prank his oblivious dad into having his house robbed by hiding all the furniture. Needless to say, the dad flipped out, and his recorded reactions were priceless! He called his son right away, threatening him to get back to the house as he was already on the verge of calling the cops. Safe to say, we don’t mess with dads when it comes to house security, not this dad in particular!

Overprotective dads are no news, with emotions made more explosive when their daughters are involved! Things took a turn for the worse when resident Ownage Pranks character Tyrone tricked one dad by calling him up and saying he’s dating his daughter, Instagram model Christiana! He called him on his restaurant’s hotline, building up tension as he switched numbers from wedding planner to daughter’s caller ID herself on their supposed wedding day, with wedding bells in the background and all! Purely evil if you ask us, but it’s pretty entertaining to see the dad lose his mind as he struggles on who-the-f-is-messing-with-me-and-my-baby-girl scenario! Just keep in mind if you’re a budding boyfriend yourself — dads are no fools when it comes to shielding their girls from your silly games.

A professional car drifter took pranking a bit too far when he pulled a hilarious prank on his dad on one Father’s Day. What was initially said to be a regular trip to a restaurant transitioned to an ultimate prank as the lad started to give in on a drift battle challenge! All screaming and cursing aside, the dad (who was scared of speed!) had a pretty good laugh about it in the end, but we can only imagine the terror and possible heart attack that might have happened. Nonetheless, this one’s perfect fuel for a good laugh out of the car pranks out there! It’s also worth noting that this was done in a safe, enclosed area by a professional, so don’t ever imitate it, kids!

Always On the Other Side

Let’s face it, sometimes following your parents can be really hard, no matter how many times they say that what they want for us is just for our own good. So when the opportunity came for YouTuber Dom Tracy to do the opposite of what his parents say for a day, best believe that he grabbed it tight! From inviting friends over, purchasing an expensive product on the Internet, and driving around with his sibling on the block (he’s underage and unlicensed!), it was all games and fun until his parents blew his cover and worked the prank challenge to their own advantage! We bet it feels pretty good to be on the wild side sometimes and get away with it, though. Right?

There’s no better time to mess with your Dad on Father’s Day than first thing in the morning when he has lowered guards and is just getting started with his day. One YouTuber decided to do just that as he put on a bunch of salt on the coffee maker, much to his father’s dismay. This one’s a classic one to copy; just make sure to make your dad a second cup of coffee (topnotch one, of course!) to pent up his rage afterward.

So, that’s it for our top picks of the most outrageous Father’s Day pranks on the Internet! Want to stage one yourself? Download our Prank Calling App; we’ve got a ton of prank call scripts that might just work on Pops! Or, if you want to take the fun a notch higher through an alternate number and convincing sound effects, check out the Spoof Calling App! If you ain’t confident yet, we gotcha! Just leave us the details through a Prank Request, and we’ll take care of the naughty deed for you.

Read Next: Top 10 Pranks To Pull On Your Parents Without Getting Into Trouble