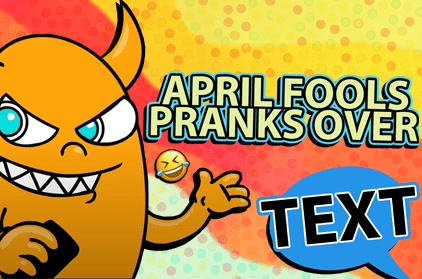 Do you want to make fun of your friends on April Fools Day, but distance hinders you? Well, not all April Fools Day pranks need to be done personally. With today's technology, you can now pull an epic prank on your friends anywhere, anytime--just have a phone!

You can prank call your friends. It's essential that you have your script ready before speaking with your victim. You can download a prank call app that allows you to access numerous prank call scripts and make the call anonymous to make it more realistic if you believe you're going to stutter! Ownage Pranks' app, which is accessible on both iOS and Android, will greatly assist you in pulling off a successful prank call.

Moreover, you can also prank them through text! You can do everything from sending their song lyrics in the guise of an odd conversation to setting up a phone service and sending them unusual details about animals or images of their favorite celebrity.

Before you continue with the pranks, make sure to keep them clean and harmless; we don't want to hurt our loved ones! Nevertheless, here are some text pranks you should definitely try!

This prank is viral on Tiktok. You would use a script from a scene from the episode "Squid Plus One," where Spongebob annoys Squidward by asking him if he's busy. And when you do the prank, start by texting your target, "Hey. Whatcha doing?" and stick to the script regardless of their response.

Make sure to screen record your conversation and share it on your Social Media accounts!

Who is this?! Prank

In this prank, you will not be the first one to initiate the conversation; instead, you will wait for your friends to text you first. Once you get a text from a friend, pretend you don't know them. Stick to your acting, and play along with whatever topic is brought up at the time. You can keep the conversation going by asking random names or asking if they are that friend that lives in this neighborhood.

Moreover, before you get your pal completely infuriated, end the prank by texting them, "April fools!"

Despite being nearly a decade old, this classic prank still can amuse. You can include this "Breaking News" link in a text message to your pals to let them know something strange is occurring in your neighborhood. The link takes them to a video of Rick Astley's "Never Gonna Give You Up" from 2008 instead of a live news broadcast, and they discover they've been Rickrolled!

Make sure your text is convincing enough to make them stop what they're doing and see what you texted them; that would make the prank funnier!

This is a clever prank if you and your partner live together. Text your partner that you brought home a pet because you find it so cute and can't take to leave it alone. If you're an animal lover, your partner will be swayed by this! If you're serious about getting a pet, this could serve as a trial run:

This is an awesome prank to pull on your spouse or partner. You can choose any long song, but we strongly recommend doing this prank using Harry Styles' Adore You. Their reaction may differ slightly from ours. Just keep texting the song's lyrics over and over again. Let them off the hook if they don't catch on and say "April Fools!"

The best victims for this prank are the parents! Modern technology is quite an alien to them, so they would definitely fall into your trick!

Unintentionally messing up everything at work is something we've all experienced. For this April Fools' text prank, send a message to a coworker with whom you have a good relationship. Don't reveal your "error"; instead, build on it and keep people guessing until the very end.

You should start the conversation with "I'm so fired," No matter what they respond, don't tell them what you did wrong. Just keep the conversation going. And when you reveal the "error," their annoyed faces would really make you crack up!

Under The Fridge Prank

The refrigerator has a "mouse" under it, and you're all by yourself. Frightened, you send a text message to a family member. The "tail" of rodent is required for this April Fools text prank. So before you do this prank, make sure you buy a toy rodent! Or it could also be a bit of frayed shoestring, or something similar might be used as the "tail" because you won't be getting a close-up picture. Leaving a small bit of the "tail" exposed, tuck it beneath a cabinet. Have some fun by sending a picture of the tail to a member of your household.

Trick your boyfriend that an important occasion has been rescheduled for today. You have to look at your boyfriend's calendar, check what he has scheduled, and then email him wishing him luck for something that won't happen for weeks. Send "April Fools!" after he panics and checks his schedule.

Prank your boyfriend by deceiving them that you did something horrible. You can start texting them with "I made a huge mistake, I hope you'd still forgive me," or "I'm really really really sorry, this is really really bad." Whatever comes to your mind, just make sure you make him nervous first! When things get heated, say April Fools and apologize! We hope you still have a boyfriend after this!

Make sure to keep the pranks clean and harmless; as always, happy pranking!