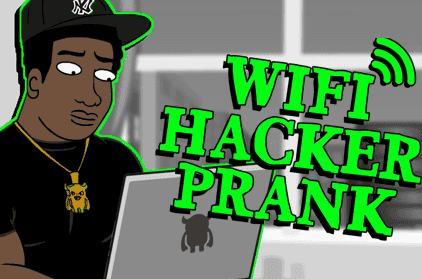 Did your internet suddenly feel slower? Oh no, someone might be messing with your internet’s bandwidth! Don’t be the butt of the joke by falling as a prank victim by these wifi hackers. If you can’t beat them, join them! (Or at least get smart enough to get ahead of them.) Establishments with wifi services are now just as important as them having restrooms. In the age of online connectedness, our devices can do everything in a heartbeat, from hailing a ride, ordering that food we’re craving, consoling a friend, to even enacting social change! We need Wi-Fi to do all these things, and there’s no doubt that our everyday lives have come to this dependency.

Sometimes people just go to cafes not because they like the place’s drinks and pastries - but because they need a place to sit quietly and tap words into their keyboard for their livelihood. Knowing this need just makes it even more fun to mess with people who own these routers. It’s done by making them lose their minds, even just for a bit, by making them believe that some unwelcome and unknown guests have hacked something so important! Not every wifi owner has a background in tech; that’s why these kinds of pranks will indeed cause panic on their end. If you’re a self-proclaimed prankster, you should know that you need to be creative because almost every opportunity is an opportunity to make fun of people! If you want to learn more about enacting funny wifi hacking pranks, then you should keep reading!

Are you sure you want to do some hack-pranking, or do you just want to mess with someone flawlessly? If you just want a good, solid prank that won’t require much work, try our prank call app! We make quick prank calls that you can send to anyone, anytime - and anywhere you want. We boast over a hundred pre-recorded pranks that are all so hilarious you’d have a hard time picking. These pranks’ range is impressive because you can choose scenarios from an annoying neighbor demanding for wifi password to a guy with a deeply masculine voice (Tyrone) threatening you for not staying away from his girlfriend. These pranks are also performed by professional voice actors. Meaning, you won’t need to disguise yourself as anyone just to pull off these pranks. The best part about this, too, is no one can trace the calls back to you because we know that great pranks come with great responsibilities - so we’re sparing you from the latter. (wink wink)

Can you get in serious trouble for hacking someone’s Wi-Fi as a prank?

The short answer for this is yes, it is possible to get in trouble for hacking someone’s Wi-Fi (even as a joke) - but very rarely. If you live in California, you might want to hold that thought by doing another prank that won’t get you into any trouble. California’s Penal Code 502 PC (also called Unauthorized Computer Access Law) punishes people for the use of unauthorized computer services. Yes, that means hacking into someone’s Wifi! If you think this isn’t much of a crime, wait until you find out that this can cause a California misdemeanor with a county jail sentence not longer than one year. The fine isn't as bad as paying hundreds of thousands of dollars, but they will still fine you with no more than 5,000 dollars.

But that’s in California, though! Suppose you don’t live there and are of legal age. In that case, we suggest that you at least run a quick Google search to check if wifi hacking is a legal offense in your area before doing anything. Most likely, your law enforcement agencies may be pretty loose about that aspect. But you just need to be 101% sure. We do different sorts of things for fun. Even if we don’t have intentions to commit a felony, we must be responsible for our actions, especially if we are legal members of society.

Now, if you live in California and think that you can’t do this anymore, then this is a signal to try our prank call app instead! It’s fun, and it surely won’t get you into trouble.

Whether you live in California or not, you can still do some “wifi hacking prank” without alarming government agencies. If you think we were going to spill the secret on how to hack into anyone’s Wifi, then you went to the wrong place. We specialize in pranks, and we are not here to expose the secrets of Hackerman, sorry! Besides, if it were that easy to hack into anyone’s wifi, internet providers may be going out of business now! What we have here, however, are hacking prank apps that can help you look like an incredible genius in front of your friends. Hey, fake it until you make it, right?

What do hacking prank applications do?

As we said, these apps don’t hack someone else’s wifi. Instead, it just SIMULATES the idea of hacking to impress your friends. The victim in these pranks is not the owner of the internet, but your friends/audience! Most of the wifi hacking prank apps operate similarly. For example, most of them will let you pick the wifi networks around your area that you wish to “hack.” After you’ve chosen your pretend victim, they will show that you’ve successfully hacked them by providing you a password mostly made of random and ambiguous symbols. They’re fake, of course, but again - you’re just here for the experience and for fooling whoever’s watching you!

While these apps’ main goal is the same, they still differ in their different ways. These are the Top 4 Hacking Prank Apps:

If you live near your friend, you can mess with them by saying that you have their wifi’s password and that you are about to play bandwidth-heavy games using it. You can tell them how you've located their device's IP addresses and show them how easily you got their password. It would be funny if they try to change the existing password by trying to protect it! To make them believe you, you need to follow these simple steps:

Like the first one, this also shows a pretend wifi hacking process. Make sure you have a friend nearby to witness all this because what’s the point of this very phony yet genius app if no one’s there to see it? Act so seriously when enacting the following steps.

You’ll be amazed by this app’s animation because it looks like the real thing! (Not that we’ve seen a real one, but this sure looks so legit to play on people who have ZERO ideas about real-life wifi hacking. Don’t be fooled by its flawless animated effects, though; you won’t get into trouble for this, hacker! The same steps apply to this app as the earlier apps, but this has the following perks:

Don’t worry about harming your neighbor’s wifi network because this app will do nothing but just perform a pretend hacking process. It can act (yet realistically) access secure Wifi networks using WEP, WPA2, AES encryption, etc. However, if you want something more up-to-date, then you must try this one. Its easy-to-use interface makes you instinctively work your way around the app without any tutorial.

It’s fun to seldomly make fun of other people by making them believe we can do cool things even though we’re not. But sometimes, these “cool things” can end us up in serious trouble. So why not just pretend to do the cool stuff while also having the same fun with it, even just for a little while? So don’t worry, California boys and girls, and anyone in between - you can still play with wifi hacking pranks. So good luck, and happy pranking!