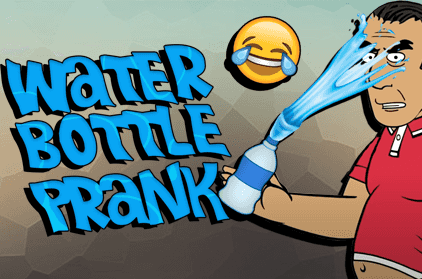 It’s almost April! As pranksters, you have to get ready for the most anticipated event for people like us as early as now. Don’t have a prank idea for April Fools Day yet? How about a water bottle prank? If that sounds like a plan, then let us welcome you to Ownage Pranks’ Pranking 101, your ultimate guide to anything water bottle prank!

If water bottle pranks don’t sound good to you. Don’t worry because here at Ownage Pranks, we have a whole array of prank ideas that can help you. Browse our blog for the ultimate guide of pranks. If prank calls are your thing, you might want to check our prank call app if you want a hassle-free experience. The way our prank calling app works is that it uses speech recognition technology that creates an automated prank call using silence detection, real time analysis, and AI response. How cool is that?!

Water Bottle Prank Ideas You Can Do Right Now!

This quick water bottle pressure prank is possibly one of the easiest prank ideas you can pull off. For this, you would only need two things (well, three, if you include the water): an empty bottle and a needle. Alright, if you've got all the things needed, fill the empty water bottle full with water. Once done, head over to the sink and poke holes all around the center of the bottle. Gently wipe off the outside of the bottle and place it somewhere near the counter or any place you know that someone will see it and pick it up. Now, this is where the fun stuff begins to happen: when someone finally picks it up and applies pressure inside the bottle, water will get sprayed everywhere because of the holes you poked around the bottle. Pro tip: this prank idea works best with thin plastic bottles, so better save one the next time you get your hands on them.

How does this work? Air pressure. Before you fill it with water, the bottle is filled with air molecules. When you pour water into the bottle, the molecules of air that once occupied the bottle come rushing out of the top. You don’t notice this because molecules of air are invisible. When you turn a bottle filled with water upside down, the water pours out (thanks to gravity) and air rushes into the bottle. Think of it as an even exchange of water for air. When the lid is on the soda bottle, air pressure can’t get into the bottle to push on the surface of the water. When it is uncapped, air sneaks in through the top of the bottle and pushes down on the water and the water squirts through the holes in the bottle. Science, indeed, is amazing and made a great contribution to the field of pranking!

Coin In A Bottle

A good prank does not require a lot of stuff. You just need the right prank mindset, your chosen bottle for prankability, and a set of convincing acting skills. For this next water bottle prank idea, you will only need a few things just like the first one: a water bottle, a coin, and a rag big enough to cover the entire bottle. Alright, here's what you need to do:

Truly, there's a ton of fun pranks you can do using plastic water bottles. For example, in this viral Tiktok video by Gordon Ramsey's daughter, Tilly, she tries to prank his father with a water bottle prank, and spoiler alert; it was really successful! Kids have been trying this out to prank their parents and are having a good time at their expense. Don't get us wrong; the video will be as equally funny as when it was done by normal, non-celebrity people. More than 14 million people have watched this video already, and we can't blame them!

What happened in this funny water bottle prank was at a table, Tilly places the water bottle with an egg on top in place of the water cap. Moving her hands around making it seem like she’s doing a magic trick to call the spirits, she makes a swift movement to make the egg look like it has disappeared. Gordon, on the other hand, leans in for a closer look to see if the egg really has made its way inside the water bottle. Right as he checks in the water bottle, his daughter squeezes the bottle, sending the water to shoot onto his dad’s face. If you thought that it ends right there, you’re wrong. Remember the egg? Well, as his father wipes his eyes because of the water, Tilly cracks it on his head and runs off before his father could even scold her!

Tilly and his father obviously had fun because of this harmless prank. Gordon Ramsey himself even shared this hilarious video on his Instagram page to assure everyone that he and his daughter are on good terms. “Someone did the dishes last night in the Ramsay household!”, he captioned. Go on and try this prank idea right now!

Looking for a prank video that will make you both go “AWWWW! :’)” and “YEEEEEES! >:)”? As water bottle prank videos take over the internet by storm, we can’t help but bawl our eyes and think about when we can have something like this. In this viral video, a cute old couple can be seen having a good time with a prank. You can tell that the wife is really excited to pull this prank on her unsuspecting husband, and his reaction is what makes this video give you new pranking relationship goals! Talk about lasting love, huh?

In this water bottle prank gone wrong, a dad tries to prank his daughter. However, what makes this video worthy to be on our list was how instant karma got the dad. People from the internet have commented, “His dad reflexes are working even when he’s trying to prank his daughter!”, “I feel deep down that he just couldn’t bring himself to shoot water into his daughter’s eyes”, “I like the water bottle prank because it is fun and harmless.” and we could not agree less!

A condom is used for..well, you know what it’s for and a water bottle is one of the common items you can find lying around. Why not combine them both for your next water bottle prank idea? First, open the condom and since the condom comes lubricated, go ahead and wipe it with a rag. Fill the bottle with water until it reaches the label, insert the condom, then fill it all the way. When the condom expands, it changes into a clear color making it camouflage with the water. Dry off the top of the bottle and apply hot glue so it sticks to the bottle. Put the cap back off, close it, and cut the remaining part of the condom. Watch as the magic happens when someone decides to open the bottle. Evil genius, indeed!

That was it for our ultimate guide for everything water bottle pranks! We hope you enjoyed browsing through Pranking 101: Water Bottle Pranks as much as we did making them! Got any prank ideas in mind? Send us a message here and we will try to get back to you. Running out of prank ideas? You can always check out Ownage Pranks’ Hall of Fame for some prank inspirations. And oh, happy pranking and don’t get yourself wet!