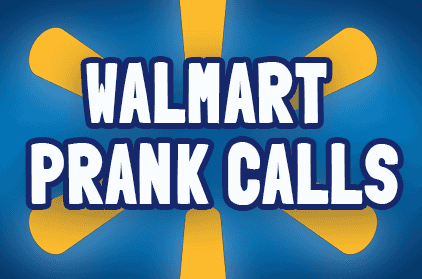 How many times did you prank call the same people before you realized you needed new blood? Probably more than you should have. When you make regular prank calls, there is a good chance you’ve exhausted your personal contacts.

The quickest and easiest way to call new people is to target random phone numbers or call local businesses in the area. Most pranksters opt for large franchises. If you call a pizza place, you won’t go to a mom-and-pop shop. You’d pick something like Dominos, Pizza Hut, or Papa Johns.

And when it comes to prank calling retail chains - Walmart is one of your best bets.

Walmart is a corporate giant with around 4,743 U.S stores. It also has branches overseas and is one of the leading companies worldwide. So when we say Walmart is your best bet for a prank call, it is because you probably live within 10 miles of one. You can also switch it up and try other branches in a different county or state.

As long as Walmart continues to make new stores and hire new employees - you’ll have targets to last you for a while.

There are several Walmart prank calls you can do. Here are some of our favorites ideas:

Walmart is such a big place. There are bound to be employees that don’t know the ropes. You can try to call customer service/information service and have fun with it.

Watch our Youtube video to see what this is like. Here Buk Lau is on a quest to refund his copy of the Dark Knight over an editing error (which exists btw!). He asks customer service about the movie department and gets sent to electronics.

Yeah, it’s a lot, but it just goes to show you how difficult it is to get things done sometimes. What normally drives customers up the walls just means more chances for sharing small jokes and funny anecdotes. This approach is 20% serious concern and 80% prank call, so it has better odds for making its way around the store.

Call Walmart’s customer service and ask them if they can PA a friend or family member. However, instead of a real name, use a prank name. It might take them a couple of tries before they realize what is going on.

Popularized by Bart Simpson, prank names are nothing new. But that doesn’t mean people catch it every time. Several Reddit users, u/jbarakristen and anon, claimed first-hand experience with the prank. They ended up calling for “Mike Hunt,” aka my cunt, and “Ben Dover,” aka bend over. It only took a store-full of customers and employees laughing for them to get the message.

If you aren’t afraid of being mistaken for a creep, this prank is for you! Call customer service asking about an employee in the so-and-so department. Give them a vague description of a fictional person and exaggerate how much you love them. After all, you are here to woo. At first, it’s all nice and sweet but slowly reveals that you aren’t as upstanding as you claim to be.

Ownage Pranks did this with Buk Lau. See, he talks about how long it has been since his last relationship. He wants to send her flowers, only to talk about his blue balls later. Boy, did each department have fun with that!

You can call a Walmart store shopping for a very niche item - something that will lead the employee on a wild goose chase. Sometimes they catch on immediately, while other times, it takes an angry manager for them to realize something is up.

One Reddit user, u/DirtyOh, claimed that someone from the fitting room asked for “equestrian condoms” which, in reality, are nothing special (equestrian = person riding a horse = regular person = regular condoms). They might have really meant “equine condoms” but hey, the effect was the same. It had the whole department laughing.

Sometimes all you need for a decent prank call is an accent or funny voice. In this clip, you can see this in action. Buk Lau calls Walmart about some foot cream. Instead of being redirected to the pharmacy, he gets a series of disgruntled retail workers who don’t understand what he is saying. So you have an angry Buk Lau, a frustrated service desk employee, and a cameo from Russell Johnson. Doesn’t that make for an interesting prank call?

Pretend to be a Walmart customer who is stuck in the bathroom because there is no more TP. Ever since the pandemic’s toilet paper hoarding - it wouldn’t be so strange for people to “stock up” while in public places. Call the service desk and ask them if they can refill the TP or deal with poop-stained socks.

A version of this actually happened to a Reddit user, u/ilikehockeyandguitar, and you bet they made someone refill the toilet paper dispenser shortly after the call.

If you want to watch more prank videos, you can check out Ownage Pranks’ Youtube channel. We have a ton of Walmart prank calls, don’t forget to comment on your favorite ones!

Make A Walmart Prank Call Of Your Own

Do you want to make a prank call of your own? First, check out our blog, How To Prank Call: Step by Step Instructions, for the basics. Then all you have to do is add your own creative twist. Remember, you need to have a compelling reason for them to take you seriously. Well, it should be serious enough for them to entertain you. After that, you can come up with different kinds of absurd requests.

Want to make regular prank calls? Download Ownage Pranks’ prank call app, which is available for both Apple and Android devices. It has everything you need, from voice soundboards to pre-recorded scripts. If you think you can come up with a better idea, you can request a prank call. Work alongside the Ownage Pranks team and bring it to life.

Walmart, Target, or Costco - these prank ideas are sure to be a hit! Happy Pranking!