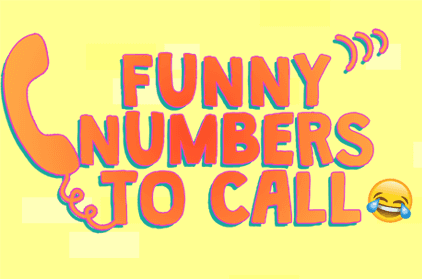 Do you find yourself sitting around with nothing to do? Are you bored and want some mischief? Entertain yourself with these funny numbers to do prank calls. No, you probably won’t find Buk Lau or Abdo on the other end, but you can get something close. Each phone number has a unique angle and script. Give it a call when you have free time. You’re guaranteed to laugh your heart out.

Besides being a fun activity, you can keep these numbers in your back pocket. You never know when having a fake number can come in handy. A mormon asking for your phone number for prayers maybe? Or an annoying salesman at the grocery store? Or that pushy guy you

It is one of the ways you can secure your exit strategy when people hound you for your contact details. You can also use them to prank your friends. When they get a new number from a guy or girl they like - swap it with something from on the list. They will feel very disappointed to find out it is fake.

Remember to keep the original one safe and sound, though. You want to prank them, not ruin years of friendship.

The name says it all - these are prank call numbers you hand out to people you don’t want to see again. A great response for the creepy guy or girl at the bar, gym, or anywhere really.

You are bound to meet people who clearly can’t take a hint. Let them do all the talking for you and explain that “Hey, he/she is just not that into you.”

It starts off mild, but later on, the script gets pretty heavy-handed. My favorite bit? “Please take the hint and accept the fact that you are rejected. And then get over it. And please do your best to forget the person who gave you this number because trust us, they already forgot about you.”

You can’t get any more straightforward than that!

The first number may have a bit of bite to it, but it can’t compare to the Mary-Sue Rejection Hotline. The Mary-Sue hotline is the perfect response for the “alpha male” types who can’t take no for an answer. Any call or text to this number will get the same script:

“Oh, hello there. If you’re hearing this message, you’ve made a woman feel unsafe and/or disrespected. Please learn to take no for an answer and respect women’s emotional and physical autonomy. K, THANKS.”

I doubt they will bother to stick around after that. And if they do, time to get a restraining order.

The Loser Line is a number set up by a Seattle radio station. Here, hundreds of calls come through with tales of woe and rejection. Unlike the other two, there is no voice on the other end, so go all out and vent.

Sometimes these recorded messages will make their way on air. So don’t drink and dial! You don’t want to be the sad SOB who can’t move past rejection. Though I have to admit it would be hilarious. Hmmm, you know what? Make the call.

These numbers might seem like they have good intentions, but they are anything but that. They have thinly-veiled insults and can make for a great prank call.

Of all the “well-meaning” phone numbers here, this one is actually the nicest. If you ever find someone with stinky breath, slip them this number and let them find out. Who knows? It might prompt them to make changes in their life.

My favorite part of the call is when it says, “Do you hear me laughing? No, you don’t. Because this is not a joke, there is nothing funny about bad breath.” Direct and straight to the point - I like it.

India is one of the top countries for outsourced work. Think about all the tedious and laborious tasks sent overseas. Can you imagine your friendship being one of them? Ouch.

The pre-recorded message starts out polite, but by the time you get to the agent’s name, you know it’s BS. He gives out a very long and very gibberish “Indian” name. It might be sad at first, but you have to admit the “but you can call me BFF, best friends for a very long time indeed,” is very funny.

You might actually be able to duplicate this call on your own. With our Rakesh soundboard, you can play a very convincing call center agent. Add a couple personal details to make the friendship package look legit, and you are good to go!

This is a rated 18+ number. It starts off as a regular customer service hotline with lines like “press 1 for x” and “press 2 for y.” But it doesn’t stay that way for long. The robotic yet snarky voice reads out a script that - how do I put this? Sounds like a cross between customer service and a phone sex line.

Have a friend whose marriage is on the rocks? The Divorce Hotline might be the number for them. The call sounds like one of those sad infomercials that play in the middle of the night. But the script is writing gold.

“Are you tired of constant nagging? Infrequent sex? Or always being wrong? Do you find yourself apologizing for things you haven’t done? Have you ever really questioned where everything in your life went so wrong?

If you answered yes to any of these questions, you might be one of the millions of Americans suffering from this chronic condition known as marriage. But don’t worry, there is a cure. Ask your lawyer if divorce might be right for you. Divorce is the low-cost alternative to homicide…”

And the call just keeps getting better and better. This number might be the sign your friend is looking for.

It Could Always Suck More

Find yourself stuck with a constant complainer? Remind them how good they have it with this hotline number. They might not be so quick to moan and groan later on. It’s one of the best ways to establish your privilege.

Not everything has to be for a prank call. If you are looking for something to call yourself, here are funny numbers you can try.

Hall & Oates are a pop duo that has defined the 80’s music scene. When you have the urgent need to relive their greatest hits, you can call this emergency hotline. You can have your pick of 4 of their songs: “Rich Girl,” “One on One,”“Maneater,” and “Private Eyes”.

Number: Your number but with minor adjustments.

In Mr. Bean’s Holiday, he was two digits short of completing a number. Because of this, he wasn’t able to reunite Stepan with his father, and hijinks ensued. You can replicate his process and find your number’s neighbors.

Replicate your cell phone or telephone number. Change the last digit to a number one step greater or lesser than the original. So from 4, you can either switch it to 3 or 5, and you have your number’s neighbor!

Infamous Second Son is a video game developed by Sucker Punch Productions back in 2014. In the game, you can find a number that works IRL. When you call, you get a propaganda speech from the director of DUP (Department of Unified Protection). Who, spoiler alert, is the main antagonist of the game.

This is an oldie, but a goldie. God of War is a video game first released in 2005. When you finish breaking all the statues, you find this little easter egg! With this phone number, you can get Kratos and David Jaffe on the other end (the main character and director).

David Jaffe kinda congratulates you at first but then brings up the possibility of getting the number online. It’s pretty sad to not discover the easter egg by yourself. But it’s been more than 15 years since the 1st God of War - you had the time.

Real phone numbers for not so real places:

Make your way to the North Pole and talk to Santa. I doubt anyone older than 5 still believes in him, but it can add a bit of magic around the holidays. The magic of the internet, that is. Who knew the North Pole would have such great reception?

You can also use this for pranks - funny script, unexpected twist, and Santa? Who wouldn’t want to give this a call? Send the number to the kids in the family or swap the contacts of your friend.

Who doesn’t want to relive the magic of the Harry Potter Universe? If you didn’t get the standard owl letter, muggles could try this phone number.

Warning: Do not give the number to impressionable young readers. Only call this number when you can tell the difference between fact and fiction. The tantrum afterward isn’t worth it. Trust me.

Just like Sex Addiction Intervention, the Psychiatric Hotline sounds like a customer service line. Riddled with jokes at every turn, this phone number is sure to put a smile on your face.

Love these ideas, but tired of pre-recorded calls? Looking for other funny numbers to call? Maybe it’s time to try making prank calls of your own. You can work with a script or improvise as you go along. Have fun with it!

Ownage Pranks has soundboards that can bring your characters to life. Rakesh, Tyrone, John, and many others - you have a whole cast and crew. You can have a prank ready in no time.

If you want something extra special for a friend - Ownage Pranks is here to help. Request a prank call! With your insider info and our years in the business, we can make a hilarious prank call! Get the best experience with our custom prank ideas and scripts!

Read Next: Have Exciting Conversations Through These Fun Numbers To Text!